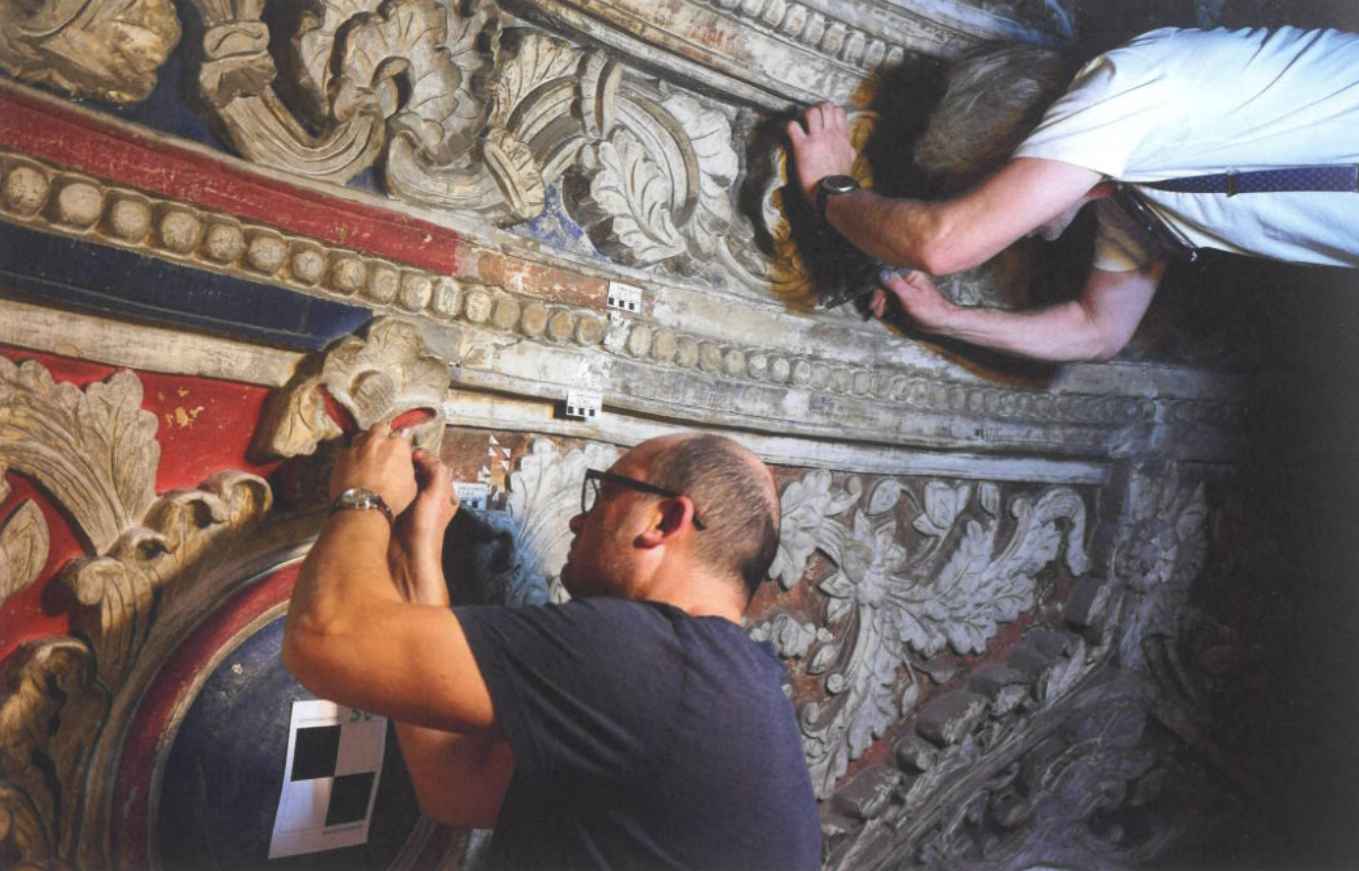 Thanks to successful German-Iranian cooperation in the field of building research and restoration technology, the historic structure of the central dome spanning the charsuq in the Grand Bazaar in Tehran has been secured. In addition to ensuring the actual restoration of the dome, the project also promoted scientific exchange between Iranian and German cultural preservation experts. The measure was co-funded by the Cultural Preservation Programme of the Federal Foreign Office and the Iran Cultural Heritage, Handicrafts and Tourism Organization (ICHHTO).

)The aim of the project was to restore the dome spanning one of the most important crossroads at the heart of the Grand Bazaar in Tehran. The dome is roughly twelve metres in diameter and is lit via a lantern at its apex. Below the dome are eight pointed arches. Four aisles intersect below the dome, with a niche containing a shop between them all. The plasterwork in the lower section of the dome features acanthus leaves, flowers and palmettes. The project aimed to secure, consolidate and complete a careful partial restoration of the interior surfaces of the dome and its plasterwork ornamentation. The project team comprised, on the German side, a group of experts from RWTH Aachen University, Potsdam University of Applied Sciences and graduate restorers from Berlin, and, on the Iranian side, representatives of the Iran Cultural Heritage, Handicrafts and Tourism Organization (ICHHTO) and Iran’s Research Institute for Cultural Heritage and Tourism (RICHT).

The first steps were to document the status quo, analyse the damage and establish the conservation goals for the restoration of the dome. The concept was drawn up and coordinated with the Iranian side in the course of several workshops. Other necessary administrative acts, as well as communication with the local traders, the “bazaries”, an important user group, were essentially the responsibility of the Iranian partners. They were also responsible for commissioning and financing the complex major scaffolding work required.
Investigations allowed the numerous colour and design changes made since the dome was built in around 1850 to be documented. Building research also permitted an analysis of the construction methods and the materials and historical stucco techniques used. A combination of SfM (structure from motion) image-based measurement and 3D laser scan proved valuable for the survey, for which only two days were available.

As these analyses revealed very different degrees of damage as well as different colour schemes, especially in the lavish stucco work, we decided to pursue three approaches to restoration in parallel.
Firstly, a monochrome section covering a quarter of the dome will preserve the remaining, largely undamaged and only slightly changed oldest stucco ornaments. This will include conserving and securing the decorative paintings on the smooth dome surface, which unfortunately remain only in a few places. Over the past few decades, the rest of the stucco work had been roughly painted over and any repairs had been very careless. Here, secondly, the newest visible polychrome version was restored. We used an eighth of this part of the dome, which was particularly badly damaged, on which to reconstruct and present the original colour scheme of the entire stucco ornamentation and thus for a third version which we could demonstratively prove given our findings. All materials used in the restoration were closely oriented to the original historical materials.

Six German and two Iranian restorers, assisted by two Iranian trainees, worked on the restoration project for just under five weeks in the autumn of 2017. This cultural preservation project intensified and promoted exchange and the transfer of knowhow between Iranian and German experts in building research, conservation, building maintenance and restoration and will be of value for further instances of cooperation.

Title image: Restorers carrying out preparatory examinations of the materials, the bonds between the stucco and the surface, and the paint layers | © Christian Raabe.