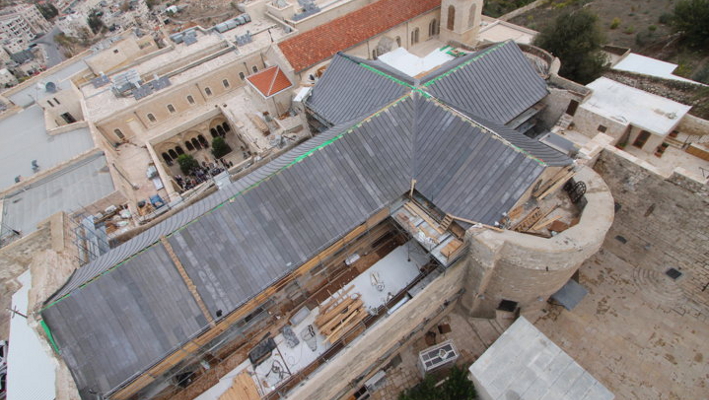 The Church of the Nativity in Bethlehem is a unique architectural ensemble comprising elements from 1700 years of varying cultural influences. The Church, which was declared a World Heritage site in 2002, is probably the oldest sacred building in continuous use in the Holy Land.

Built in 339 AD under the auspices of Helena, the mother of Emperor Constantine, the original structure of the Church of the Nativity was largely destroyed, then rebuilt by Justinian in the mid-6th century and redecorated by the Crusaders in the 12th century. Today the Church is overseen jointly by the Greek Orthodox, Catholic and Armenian Churches, which means that the daily services and numerous religious festivals of all three have to be taken into account during the restoration work.

Restoration began in 2013. Supported by the international community and the Palestinian Authority, the Italian restoration experts of Piacenti s. p. a. first tackled necessary work on the roof and windows, then on the external walls, nave, plaster and mosaics.

From a platform at the level of the joists, a temporary roof was installed to allow the restoration of the ancient roof system. Decayed sections of the joists were removed and replaced with ancient wood brought from Italy. The prime aim of these restorations was to retain as many of the original materials and elements as possible.

The external walls and internal plasterwork had been badly affected by rain, humidity and some microbiological damage. Restorers specialising in the conservation of stone and plaster therefore first cleaned all the surfaces and removed extraneous materials, filling in cracks with a suitable mortar and consolidating the most badly damaged areas. At the same time, work on the nave began.

A considerable amount of German support has been directed towards the restoration of the Church’s eastern door to the nave – a large ancient wooden structure with ornate woodcarvings which will soon again open to one of the most fascinating churches in history.