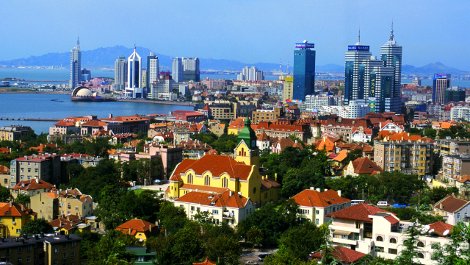 From 1898 until 1914 the Chinese port city of Qingdao was a German concession. Even today the face of the city is dominated by old German architecture: Christ Church in particular bears witness to a bygone age.

Christ Church, originally called “New Church”, was built by the Berlin Protestant Church Board between 1908 and 1910 and consecrated on 23 October 1910. Following the proclamation of the People’s Republic of China by Mao Tse-Tung, the then last service in Christ Church was held on 27 November 1949, the first Sunday of Advent.

In the wake of the reform and opening-up of China, the exercise of religion under state control is again possible. Sunday services have been celebrated in Christ Church again since 1980. Today the church has around 1200 members and is used for baptisms, confirmations and weddings. It has a lively musical life ranging from the church choir to rap.

The Free State of Bavaria, as part of its twinning link with Shandong Province, has done much to preserve the German cultural heritage in Qingdao. Now the Foundation for the Preservation of German-Style Buildings in China, with a grant from the Cultural Preservation Programme of the Federal Foreign Office, has worked with German experts to reconstruct the copper covering on the top of the spire. At the same time, the roof was restored with a weathercock to replace the one which fell in a storm in 1942. The next projects planned are the restoration of the pipe organ and the ornate leaded windows, which were destroyed during the Cultural Revolution.

The restoration of Christ Church’s capped roof is no mere construction project; it is a highly symbolic project, a special way to approach Sino-German history.

Qingdao, whose economy and population are growing rapidly, is increasingly looking to its German colonial heritage, not so much out of nostalgia but rather in the realization that preserving and restoring its historic architecture will give it a competitive advantage over other cities which are becoming ever more faceless and similar as a result of modernization.

Although other cities, e.g. Weifang, Wohan and Tianjin, have notable German-style buildings too, only Qingdao has an Old Town laid out entirely in the European style. An application has been submitted for its inclusion in the UNESCO World Heritage List.