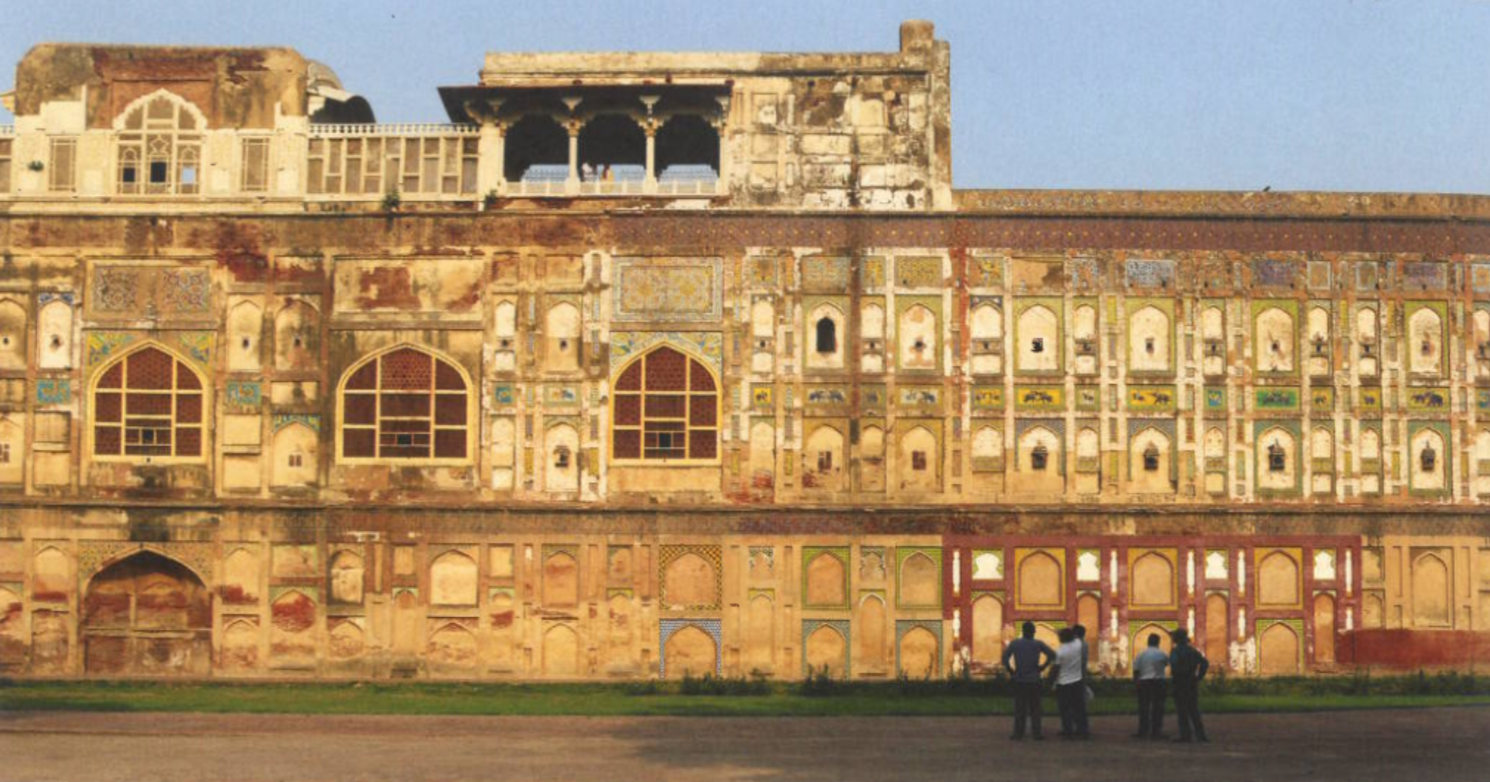 The Picture Wall at Lahore Fort, with all its extensive embellishments with tile mosaic and fresco panels, brick imitation and filigree work, represents the exceptional craftsmanship of the Mughal period. In 1981, Lahore Fort was therefore inscribed as a UNESCO World Heritage Site. The tile mosaics and frescoes have been severely damaged by disruptions to the original water drainage system and by exposure of the exterior facade to extreme weather conditions.

Since September 2015, the Aga Khan Trust for Culture (AKTC)/Aga Khan Cultural Service Pakistan (AKCSP) has been in partnership with the Government of Punjab’s Walled City of Lahore Authority (WCLA) for the documentation/conservation of the Picture Wall. The completion of documentation work led to the selection of an 11m wide and 16m high segment of the western wall for prototype restoration. This prototype project was mainly funded within the context of the Cultural Preservation Programme of the Federal Foreign Office.

Although Lahore Fort has undergone successive periods of construction and destruction throughout its history, most of what stands today is considered a classic example of the time when Mughal art and architecture had reached a pinnacle. The 440m × 16m Picture Wall, one of the largest murals in the world, is responsible for the Fort’s World Heritage status. Prior to the actual conservation of the deteriorated mural, a prototype section (11m × 16m) was selected to test the principles that adhere to universal conservation ethos, which would eventually set standards for the subsequent conservation.

In Pakistan, conservation is not yet recognised as a professional field in its own right, nor is it given priority in the educational institutions; this project therefore provided a platform for young graduates to work under international conservation experts from various disciplines. In this way, the prototype project has started the wave of training young professionals in the conservation of decorated facades.

The focus of the project has been largely on preservation, experimenting with techniques and methods in order to establish the most effective way of ‘freezing the existing condition’ and enhancing its aesthetic beauty to embrace the original exquisite craftwork. On the other hand, considering the need to support and revive traditional crafts, reconstruction has also been carried out with very particular guidelines. As a result, this project has both trained young individuals in restoration and sustained and encouraged traditional crafts by employing local craftsmen from the immediate context.

It is important to note that this was also the first project in Pakistan where intensive scientific research and analysis was conducted before conservation techniques were applied. The entire process included removal of latterly added plaster, treatment of biofilm on the surfaces, reintegration of fresco and brick imitation work, consolidation of tile mosaics and glazes, and applivcation of new plaster to create a visual order for viewers. The ground below the prototype area was also excavated to expose the original ground level. This work was positively received at the International Workshop and will be taken as the way forward for the conservation of the entire Picture Wall.