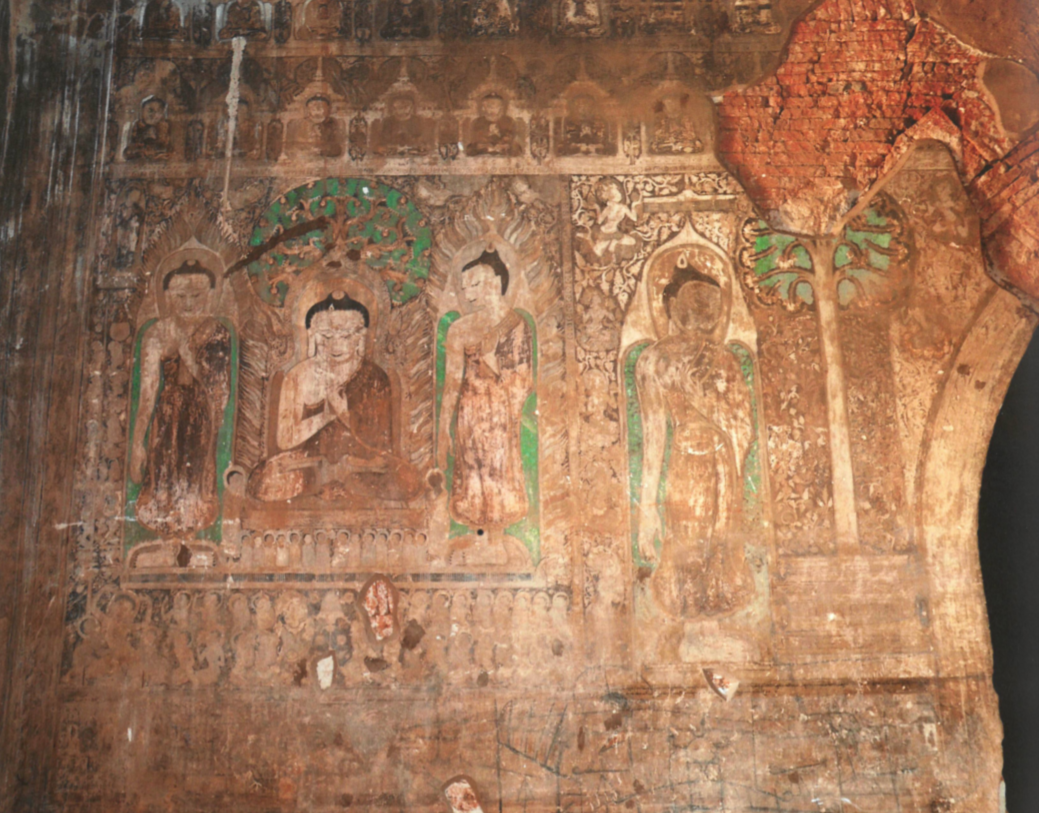 An earthquake hit the temple city of Bagan, one of the world’s most important historical cultural sites, in 2016. Almost 400 of the around 3000 sacred architectural works were damaged, some of them seriously. The extremely heavy spires of many temples fell to the ground, while centuriesold masonry became loose, cracking precious murals and stucco decorations.

by Andrea Teufel, M. A. (Project Manager, Society for the Preservation of Cultural Heritage)

Nowhere in the world is the concentration of murals as high as it is in Bagan, where the original paintings are still to be found in around 400 historic temples. Most of them were painted around 800 years ago, making them among the oldest existing murals in South-East Asia. The fact that these murals have survived despite decay and the regular occurrence of earthquakes is most likely thanks to a fortunate combination of factors. These include the relatively dry climate in the plain and probably also the techniques used for the plasters and murals. In contrast to the contents of the Buddhist Jataka depictions in the murals, little is known so far about these technical aspects.

The planned recognition of Bagan as World Cultural Heritage has now created the ideal conditions for examining the historical substance in its entirety, for coordinating the forthcoming preservation measures on the buildings and murals from the outset and for carrying them out to the highest conservation standards. The vast magnitude of this task is unique and requires close cooperation among all national and international players involved. In a first step, UNESCO and the DoA, the department responsible, have drawn up detailed guidelines in order to prevent any uncoordinated action with regard to the concept by any individual body and to ensure high standards. A database is being developed and an international coordinating committee will be established. The DoA and the country teams involved have already formed a network and have exchanged initial findings.

The German project will be an important part of the preservation of the murals. Conservation and restoration methods are to be developed for the murals in temple No. 539, Narathihapatae Hpaya (formerly Tayok Pyi), which were painted in around 1248. As they are comparable in terms of art technology with more than 300 other 13th-century murals in Bagan, the work on this temple will act as a pilot project. This scientific approach should produce
better results than previous attempts. If possible, conservation materials harmful to works of art or those handling them will be replaced by more suitable materials.

Germany’s aid will be targeted in those areas where urgent expert support is needed. In view of the immense scale of the tasks, however, the Myanmar partners have shown admirable commitment in their desire to play a leading and active role in the preservation of their cultural property. For example, the conservation and restoration of murals in the Narathihapatae Hpaya Temple will be carried out in collaboration with the conservation team of the DoA, and thus serve as a blueprint for many other projects.

Stay Tuned: Read more about the preservation of the murals and the stone temples in our next blog post!

Read More about the temple city of Bagan in our previous blog post: