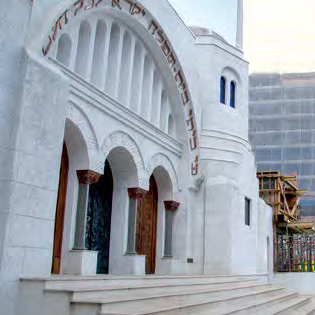 Funding from the Cultural Preservation Programme of the Federal Foreign Office made it possible to restore the Beth‑El synagogue, built in 1929 and inaugurated in 1932 in the centre of São Paulo, to its former glory.

The biggest city in the southern hemisphere with the longest traffic jams, the greatest number of helicopters, the best restaurants, the biggest German centre of industry in the world – São Paulo is a megalopolis, a city of superlatives. And right at the heart of its once run‑down centre there is yet another superlative, namely the most important Jewish sacred building in Brazil, the former Beth‑El synagogue.

Revival of the centre of São Paulo

Beth‑El was restored with funds from the Cultural Preservation Programme of the Federal Foreign Office and is now an integral part of the first Jewish museum in Brazil currently under construction. The museum complex will, moreover, be part of the work already begun to restore and revive the city centre.

Amongst other things, the original plaque of architect Samuel Roder has been uncovered, along with a stone model of the building and above all, the original materials and colours, all so that the Synagogue can shine not only with a renewed freshness, but also in its original glory. Along with the façade, the magnificent dome in Byzantine style and the stained glass windows, the wooden altar with its Torah shrine and the original benches dating back to 1932 were restored.

“The German restoration of the synagogue is a quantum leap,” commented the museum’s Director, Roberta Sundfeld, and “it has already attracted sponsors to the museum.” In this case, the Cultural Preservation Programme is not just living up to its name, it has provided the impetus for new projects and is thus a beautiful German-Brazilian symbiosis, symbolising the vibrant history of the centre of São Paulo.