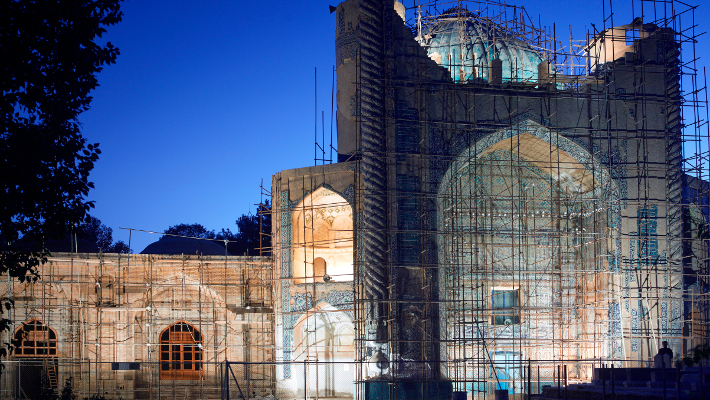 The town of Balkh, which was known as Bactra in ancient times, dates back to 500 B.C. and is situated some 20 kilometres north-west of Mazar‑e‑Sharif in northern Afghanistan, on what was once the Silk Road. It is regarded as the cradle of Iranian civilisation and has been an important pilgrimage site from time immemorial.

Over the course of its history, Balkh has been a spiritual centre of Zoroastrianism, Buddhism and Islam respectively. It served as one of Alexander the Great’s northernmost bases from 329 to 327 B.C. It was completely destroyed by the Mongols under Genghis Khan in 1220 and only rebuilt in the fifteenth century under Timurid rule. However, the town’s significance continued to decline, not least as a result of the provincial government’s move to Mazar‑e‑Sharif in 1866.

In addition to supporting restoration and stabilisation work on important buildings such as the Khvajeh Abu Nasr Parsa shrine, the Dehdadi Mosque, the Sudhan Qoli Madrassa Gate, Abu Zaidan Mosque and minaret, and Mir Rusedar and Khvajeh Nizamuddin shrines, the Cultural Preservation Programme of the Federal Foreign Office is funding the restoration of the buildings’ gardens and public spaces. The aim of this major project is to improve local residents’ living conditions and infrastructure in the long term by constructing infrastructure such as roads, sewage systems and waste disposal systems.

Close involvement of the population

A further part of the project involves training programmes in traditional crafts such as carpentry, bricklaying and the manufacture of glazed tiles. Involving the local population and administration closely at all levels creates cultural identification with the local historical heritage and increases the sense of responsibility for this identity. The project is a good example of how cultural preservation can be achieved in harmony with economic development, modern urban planning and the needs of the local population.

At the suggestion of the Afghan Government, Balkh old town was added to UNESCO’s Tentative List of World Cultural Heritage in 2004.