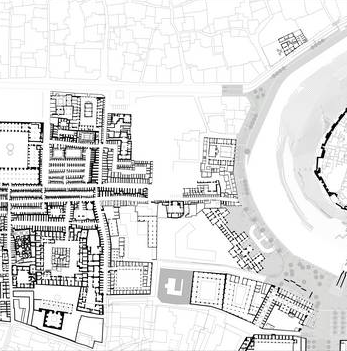 A digital map of Aleppo’s ancient city centre is going to help to rebuild what was once one of the biggest trading hubs in the Middle East.

The pictures of a ruined city that was once one of the Middle East’s major trading hubs have gone around the world. Researchers from BTU Cottbus–Senftenberg are working on concepts for the rebuilding of this city. The potential basis for the future rebuilding plans is a detailed digital map of Aleppo’s ancient city centre.

Civil war has raged in Aleppo, Syria’s second-largest city and one of the oldest permanently occupied human settlements in the world, for five years. Before the conflict, this was a city of 2.5 million people. Today, more than half of its population has fled. In the course of the civil war, much of the city, especially its ancient city centre, a UNESCO World Heritage Site since 1986, has been heavily damaged.

The researchers headed by project manager Christoph Wessling are facing a Sisyphean task. Around 20 gigabytes of data have to be systemised. Until shortly before the civil war broke out, the university’s urban planners and architects were involved in the socially sensitive renovation and revival of the ancient city centre, which was threatened by decay and poverty. In 2004, the German-Syrian project, which was funded by the Deutsche Gesellschaft für Technische Zusammenarbeit with €20 million, won a Harvard University Graduate School of Design urban planning award. The data collected at the time now comes in useful as it will make it possible to reconstruct the city. The researchers are combining roads, pavements, public spaces with fountains, statues or gardens and the floor plans of former buildings from 2011 digitally, which will make a reconstruction possible.

The aim is that in future, a tap on the digital map of the ancient city centre using a tablet computer or a mobile phone will reveal all of the building plans, photographs and descriptions for a particular location. Buildings and other city structures that are currently buried underneath the ruins will become visible. Where piles of rubble are all that is left today, the map shows the foundations, roads, lanes and plot structures that still exist underneath.

“These structures are the basis for the UNESCO World Heritage Site classification. With this project, we want to raise the general awareness of the rebuilding work that will be needed once the conflict is over, and prevent undesirable urban development that may ignore these important basic structures,” says Prof. Heinz Nagler, the head of the Urban Planning and Design department. “Our aim is to create a qualified planning basis for the rebuilding of the city. Future individual construction projects can be integrated into this overall picture to then be evaluated accordingly. We are thereby making a major contribution towards preventing the potentially insensitive large-scale renovation of Aleppo’s ancient city centre after the civil war, and are making a critical reconstruction process possible that also takes the interests of the city’s inhabitants into account”, summarises Prof. Dr. Klaus Rheidt, the head of the Building History department.

The researchers hope that this map will be completed by the end of the year, and can then be made available to the Syrian Heritage Archive at the German Archaeological Institute (DAI). However, the map could also be used by Aleppo’s city council, the city’s future urban development planners, potential investors, decision-makers and urban designers, researchers, journalists, writers and the interested public as a basis for the classification and evaluation of future projects.

The project is part of a pilot project entitled “Stunde Null: A Future for the Time after the Crisis”, which addresses the issue of the rebuilding of Syria after the war. It will be the first project to be carried out within the scope of the Archaeological Heritage Network, which focuses on the conservation of cultural heritage. The network and the project receive funding from the German Federal Foreign Office. The BTU subproject will receive funding amounting to €75,000 until December 2016. An extension is planned.