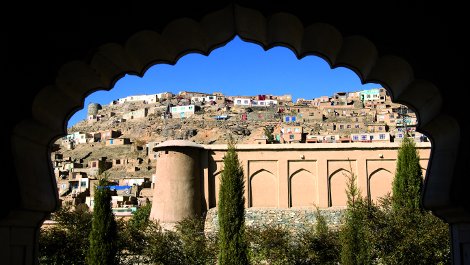 Babur Gardens, known as Bagh-e Babur, in the Afghan capital Kabul are an oasis of peace in a wartorn land. With over a million visitors since they reopened in 2008, the gardens are the city’s most popular leisure attraction and at the same time an important witness of Afghan history.

South-west of Kabul Old Town, at the foot of Kuh-e Sher Darwaza hill, lies Bagh-e Babur, one of the oldest surviving gardens from the Mughal period. Bagh-e Babur, laid out after the conquest of Kabul (1504), was one of many gardens established by Zahir ad-Din Muhammad Babur (1483–1530), the founder of the Mughal dynasty. The ruler’s passion for gardens had a long tradition: for thousands of years gardens had been an integral part of home and palace culture. In the Islamic world, garden planning and design incorporates both religious concepts and aesthetic principles. Intricate geometric forms on either side of a central axis reflect order in diversity, transposed in nature with marble water-channels, fountains and cascades. The garden is a metaphor for divine order and, as a paradise on earth, a place of refuge for the faithful.

The garden’s importance – and its survival to the present day – is due to Babur’s wish to be buried there, in his homeland, far from the hot Indian plains. As his last resting-place, Bagh-e Babur became a place of pilgrimage for his successors. Their memoirs contain detailed descriptions of the work they financed to embellish the gravesite. After the collapse of the Mughal empire, from about 1750, the garden fell into neglect. Lithographs, early photos and travel writings from the 19th century show it to be unkempt. It was not tended again until Amir Abdur Rahman Khan, the first ruler of a united Afghanistan (r. 1880–1901) and a keen builder, took the garden in hand and radically altered it in keeping with the style of the day. The last major changes date from the reign of Nadir Shah (1929–1933), who put a European stamp on the gardens. It was this garden which withstood the time of war and political confusion, with its sparse vegetation and pockmarked by the detritus of war.

Initial plans to redesign Bagh-e Babur paying heed to its historical roots were made back in the 1970s, but the political situation was such that they could not be implemented. It was not until 2002 that a new chapter in the long life of the garden began. Following the discovery of structures from the Mughal era during the investigations carried out by the German Archaeological Institute (2002–2005) the interdisciplinary rehabilitation project of the Aga Khan Trust for Culture modelled the reconstruction of the garden on this research.

Responsibility for the garden passed into Afghan hands in 2008, and it has since been managed by an independent trust. In view of its historical importance, Bagh-e Babur became part of UNESCO’s Tentative List for inclusion in the World Heritage List in 2009.