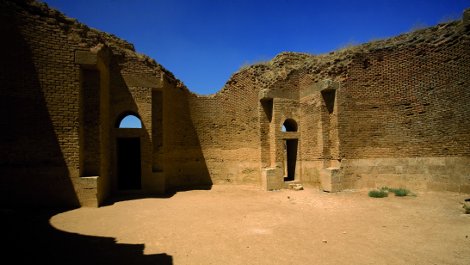 The Islamic Umayyad dynasty constructed impressive buildings in the Middle East which remain a source of fascination to this day. Indeed some of them still pose puzzles. The most mysterious are the desert palaces built in the countries of the Levant. Almost a dozen such complexes were built in remote places, and academics still cannot agree on their function.

Mshatta Palace (in arabic Qasr al-Mshatta), situated south of Amman in Jordan, is one such palace and, in artistic and archaeological terms, the most valuable. The main facade and the audience court were decorated with intricate stone carvings. The detailed foliage scroll work on the facade illustrated the gradual emergence of an independent islamic style of ornamentation. In 1903, as a result of work on the construction of the Baghdad railway, a section of the palace’s facade was brought to Berlin to the Pergamon museum, which was just being established. There the wonderful facade is today one of the jewels in the collection of the museum of islamic art.

But what became of the original site?

It was forgotten, and not “rediscovered” until the 1960s. Today, lying to the north of Amman airport, it has been rehabilitated and is to be promoted as a further highlight of Jordan’s burgeoning tourist industry. However, a great deal of work remains to be done. The brick walls have been hollowed out by the effects of the weather and need to be repaired using a special mortar made of lime, brick dust and ash. Missing bricks in the style of the old ones will be manufactured specially. Finding the right firms for this requires a good local knowledge, and the formulae and technology require specialist know-how in the field of conservation. So the preservation and restoration of this unique monument in Jordanian history is an ideal opportunity for a joint project by Jordan’s antiquities authorities and Technische Universität Berlin and the National Museums in Berlin. As soon as the walls have been made safe, the arches, which collapsed as a result of earthquakes, will be rebuilt so that visitors can gain an impression of the palace’s former splendour. Finally, a viable solution needs to be found for the gap left by the facade now in Germany. Then, at the beginning of the 21st century, this authentically restored palace will be another highlight on the Jordanian tourist trail. In 744 the luxurious palace complex became the ruin of Caliph al-Walid II, whose ambitious construction projects so angered his people that he was assassinated.