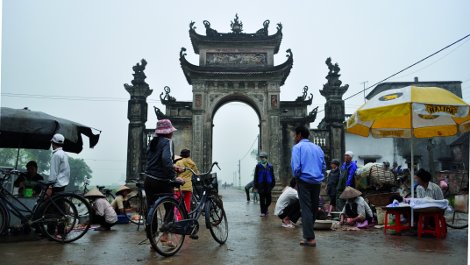 The historic village centre of Tran Dang in north-east Viet Nam is testament to a rich cultural heritage. Here, where for centuries people have met, traders bartered and believers worshipped protective spirits, restoration workers are endeavouring to preserve historic evidence.

The ancient village centre of Tran Dang – the village hall, the socalled Dinh, being the oldest building – dates back to the 13th century. It stands on a peninsula shaped like a tortoise – one of the four animals held as sacred by the Vietnamese. The joists and beams of the building are decorated with valuable – because of the degree of craftsmanship – woodcarvings. Some are in colour, some purely ornamental, while others depict scenes from folklore and mythology. On the roof ridge there are figures of sacred animals made of rare black clay.

The Dinh was later extended to include an altar room to honour the village’s protective deity. The bell tower, village fountain, the bridge to the Dinh and the main gate to the square date back to the later Nguyen Dynasty (1802–1945). It was during this period that the most recent innovations of historical and artistic value took place. During the Vietnam War, the tower bells warned the surrounding villagers of American bombing raids and the village hall was used to store rice and other food. After the war, makeshift repairs restored the damaged building for use as the focus of the village community once more.

Over the centuries the inhabitants of Tran Dang have done their best to look after and maintain the building. Over time, however, infestations, water damage and the effects of age have taken their toll on the building. The task of maintaining it was too great for the local population, who lacked both funding and the necessary expertise.

Now, with funding from the Federal Foreign Office’s Cultural Preservation Programme, the entire construction of the Dinh – built of ironwood – has been restored in line with its value as a historic monument. The roofs of the main house and altar room extension and other historic features have also been restored. The buildings adjacent to the village hall and the village fountain, also situated in the centre, will be restored next. The village inhabitants are closely involved in the work.

That the historic centre of Tran Dang can already bask in its newfound glory is the impressive result of the restoration work so far.