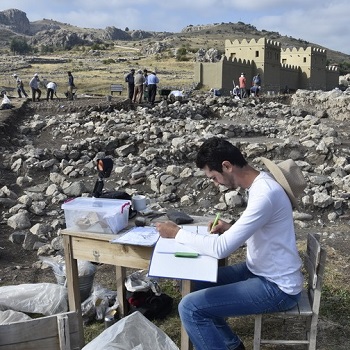 The publication of The Best in Heritage 2020 is online and free to download now. In the category „Project of Influence“ 2020 the project “Stewards of Cultural Heritage” was awarded with the the secon prize.

The Stewards of Cultural Heritage programme (SoCH) is a subproject of the “Stunde Null“-initiative of the Archaeological Heritage Network (ArcHerNet), and received an European Heritage/Europa Nostra Award in 2019. Regarding the Stewards of Cultural Heritage programme the jury stated “This is an excellent, international and collaborative, training initiative, involving a variety of stakeholders and addressing an important current issue with pan-European relevance. The project addresses some of the complex issues raised in the hosting of a skilled, displaced, Syrian population in Europe and it attempts to enhance their ability to integrate into the existing mechanisms that promote the safeguarding and re-use of cultural heritage assets.”

The ArcHerNet was founded in 2016 and intends to bundle existing competences in Germany in the fields of research, protection and preservation as well as the mediation of cultural heritage. It comprises various member-organizations, such as Universities, research institutes, private foundations or museums. The network aim is to support applying Germany’s expertise in the field of cultural heritage preservation worldwide.

A Future for the Time after Crisis

The first and most significant project for ArcHerNet since 2016 has been “Stunde Null – A Future for the Time After the Crisis”. As part of this series of projects, measures were conducted with the aim of laying the groundworks for cultural preservation in the context of a later reconstruction in current crisis areas such as Syria or Iraq. The project focuses on the further education of architects, archaeologists, conservationists, building archaeologists, urban planners and craftspersons. Further measures of the project series are scholarships for Master’s degree programmes in monument preservation, heritage conservation and site management.

Within this context, the Stewards of Cultural Heritage project (SoCH), based at the German Archaeological Institute – Istanbul (DAI-Istanbul), is focussing at Syrian architects and archaeologists residing in Turkey after having to leave their home country. The project’s first phase has been a 24-months scholarship programme (October 2016–September 2018), funded by the German Federal Foreign Office and the Gerda Henkel Foundation. The programme was directed by Katja Piesker and coordinated by Diana Miznazi, both DAI-Istanbul.

Initially five out of the 3,62 Million Syrians, which have found refuge in Turkey, were chosen for the programme to give them  the opportunity of building the theoretical and practical skills needed to actively participate in conservation and/or revitalization projects that would take place in the post-conflict period in Syria. The funds provided allowed some of the attendees to qualify at Turkish Universities or to run their own research projects and to participate in a series of theoretical and practical workshops with German and Turkish heritage experts organized by the DAI and thereby open up new or previously neglected aspects of archaeological research and cultural preservation: the archaeology of Islamic periods and the question of involving the local population in the sense of community archaeology.

Within the framework of the programme, the five specialists carried out their individual projects and continued their academic education in Turkey while attending a number of workshops and a summer field project organized by the German Archaeological Institute – Istanbul Department. The individual projects range from an interactive map with natural and cultural heritage sites in the Syrian steppe – based on more than 100 interviews with residents of the region who fled to Turkey – to a book that gives Syrian children a glance of the rich cultural heritage of their country.

As part of the programme the stewards joined a seven-week field project of the University of Münster at the archaeological site of Doliche to get some hands-on experience. The participants documented, assessed, planned and executed the consolidation works to secure together with local workers parts of the Iron Age enclosure walls of the shrine to open this area to the public. The programme included a critical assessment of the sites’ appearance and state of conservation leading to pragmatic measures with achievable consolidation solutions. Different documentation techniques were practiced from traditional hand drawing to state of the art SfM-recording.

In the second project phase, the experts trained in the first phase of the project have been passing on their knowledge and skills gained to other Syrians (professionals and non-professionals) in Turkey and elsewhere (SoCH 2). This phase of the project, which is again funded by the German Federal Foreign Office and the Gerda Henkel Foundation, has started in January 2019. It has three main axes: capacity building, awareness raising and networking.

The main aim of the second stage is distributing knowledge on cultural heritage amongst Syrians by Syrian heritage specialists (in addition to Turkish, German and international experts). The objective is to create a network for Syrian experts in Turkey to deepen and to share their knowledge with larger groups of Syrians residing inside and outside of Turkey. The former scholarship holders and other selected trainers have the sufficient knowledge and experience to identify interested target groups among the Syrian refugee community in Turkey and to teach them about Syrian cultural heritage and its preservation.

Exhibition “Bir Mekân, Bir Hikâye” (A Place and a Story)

Another component for our awareness raising activities was to organize the photo exhibition “Bir Mekân, Bir Hikâye” (A Place and a Story) in cooperation with the Kadir Has University and the Rezan Has Museum in Istanbul. It was held in the Khas Gallery of the Kadir Has University between September, 18 and October, 26 2019. The title of the exhbition “Bir Mekân, Bir Hikâye” uses two of many words that have the same meaning in both Arabic and Turkish. As such, they illustrate the close connection between the two cultures and neighbours. The exhibition meant to show Syria as Syrians remember it: a country full of treasures and surprises by focusing on people’s memories and their relationships with cultural herit – age. Similar to Turkey, Syria hosts one of the world’s most comprehensive and long-lasting cultural heritage records. However, as it is well known, recent years have witnessed difficult times and many painful losses.

The exhibition is based on photographs from the photo archives of the German Archaeological Institute, the Museum of Islamic Art in Berlin, the Max von Oppenheim Association and some personal collections of researchers, who have worked in Syria. The images, mostly documenting archaeological monuments and cultural heritage sites, were paired with the testimonies of daily lives collected through a series of interviews with Syrians in diaspora. The combination of heritage sites and people’s stories, inflicted an immediate discussion by visitors on the devastating impact of the conflict in Syria on both human life and cultural heritage. To make use of this inspiring setting a series of workshops took place directly in the exhibition hall.

In 2020 we entered the third phase of the programme which is coordinated by Abdulhamid Dihna and directed by Moritz Kinzel, both DAI-Istanbul. In this current phase we are supporting some more individual projects dealing with the questions of urban reconstruction, the collection of oral traditions and memories, and the further development of outreach and teaching materials. Hand-on workshops to learn how to document, access and evaluate cultural heritage monuments are planned to include this time as well several Turkish students of archaeology and architecture to establish stronger networks for the Syrian colleagues in Turkey.

The Stewards of Cultural Heritage are a project that shows there is a future after the crisis and that we are in need to further disseminate knowledge on cultural heritage to gain support and to raise not only awareness for but also appreciation of (shared) cultural heritage.