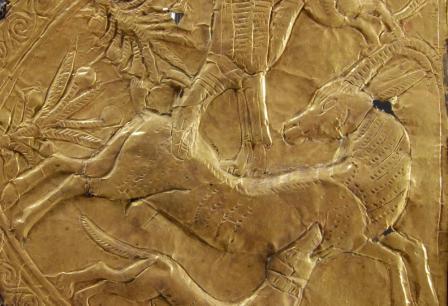 The project which is carried out in collaboration with the IANES-Institute, University of Tübingen, the Römisch-Germanisches Zentralmuseum in Mainz (RGZM) and the Egyptian Museum in Cairo centers on approx. 100 gold sheet appliqués from the tomb of Tutankhamun. The main aim is a comprehensive restoration and scientific analysis of this previously little considered corpus of objects.

Nearly a century ago now, in 1922, Howard Carter discovered the tomb of Tutankhamen, dating from the 14th century before the Common Era. What ancient Egyptian object is as iconic as the young pharaoh‘s golden death mask? The mask was put on display and caused a sensation. But some other artefacts discovered at the same time have received comparatively little attention. Some of these undeservedly neglected items are now being studied in a collaborative project involving the DAI ‘s Cairo Department – specifically approx. 100 fragments of gold relief panels found near the chariots in the antechamber of the pharaoh‘s tomb. They consist of embossed gold foil attached to solid material, presumably leather and textile. Until recently they were kept in the storage magazine of the Egyptian Museum in Cairo. Now these extremely delicate artefacts are being analysed, scientifically appraised, restored and prepared for public presentation.

Here and there the solid material to which the thin gold foil was attached still survives. It is thought to consist of several layers of leather, textile and plaster. Non-destructive technologies are being used to determine the composition of the material and the means by which the gold was fastened to it. Many of the gold foil fragments have become separated from the material that formerly supported them, and most of them are damaged, displaying warps, folds and tears.

But material analysis is only one part of the job. “We want to try and eliminate the damage as far as possible to recapture the legibility of the figural scenes,” says Christian Eckmann, restorer at the Romano-Germanic Central Museum in Mainz. To do this, the restorers have to carefully unfold bent fragments and stabilize cracked ones by fixing them to fine synthetic fibre. “It‘s often little things that reveal a lot,” says Stephan Seidlmayer, director of the Cairo Department of the DAI. For instance, some motifs are traditional in ancient Egyptian art, such as the pharaoh on a hunt, in battle or enacting a rite. Other images occur across the eastern Mediterranean from the late Bronze Age onwards, e.g. bullfights, caprids at a tree, and various ornamental plants.

“These gold relief panels, overlooked until now, in fact provide important evidence on international contacts between powers in the East in this period,” Seidlmayer says. These contacts include not only war, tribute and dynastic marriages, but also trade in metals, glass, semi-precious stones, raw materials, luxury goods and foodstuffs, as well as the exchange of officials. And these small gold fragments may also yield new insights into Egyptian chariots of the Bronze Age. 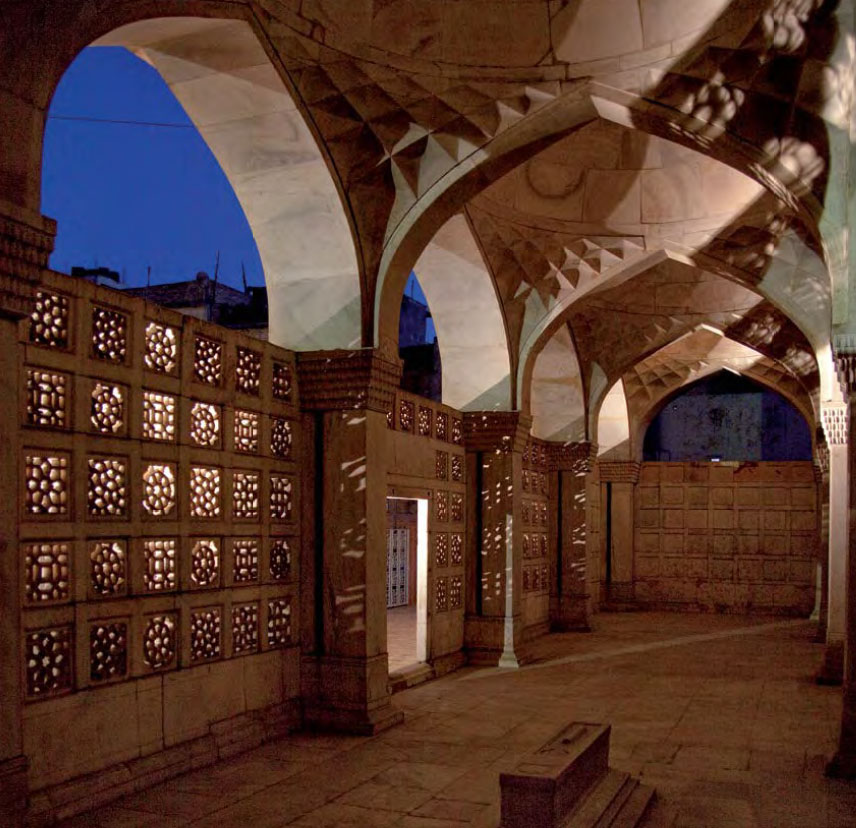 The restoration of Chaunsath Khambha, a Mughal mausoleum dating back to the early 17th century, was carried out between 2010 and 2014. The project was part of the Urban Renewal project run by the Aga Khan Trust for Culture in the historic Nizamuddin quarter, where Humayun’s Tomb – a World Heritage site – is also to be found. For this unique project, the 25 marble domes in the tomb were removed and put back together by hand to replace centuries-old damaged iron dowels.

Chaunsath Khambha was built in 1623–4 to serve as a tomb for Mirza Aziz Koka, foster brother of the great Mughal Emperor Akbar. The name reflects the tomb’s architecture: chaunsath (64) stands for the tomb’s 64 marble pillars (khambha). The mausoleum is unique on account of it being built entirely out of marble, with 25 marble domes supporting the flat roof of the structure.

The marble blocks of the 25 domes are linked to one another and embedded in the brick masonry above the domes with iron dowels. The rain water that had collected on the roof over the centuries had severely corroded the iron dowels. This led to them bursting through the masonry in all parts of the mausoleum – domes, arches, façade and even the columns. The mausoleum’s entire structure was thus in jeopardy.

Chaunsath Khambha was built in 1623–4 to serve as a tomb for Mirza Aziz Koka, foster brother of the great Mughal Emperor Akbar. The name reflects the tomb’s architecture: chaunsath (64) stands for the tomb’s 64 marble pillars (khambha). The mausoleum is unique on account of it being built entirely out of marble, with 25 marble domes supporting the flat roof of the structure.

The marble blocks of the 25 domes are linked to one another and embedded in the brick masonry above the domes with iron dowels. The rain water that had collected on the roof over the centuries had severely corroded the iron dowels. This led to them bursting through the masonry in all parts of the mausoleum – domes, arches, façade and even the columns. The mausoleum’s entire structure was thus in jeopardy.

unique architectural design and construction of Chaunsath Khambha as well as the fact that each stone was unique in shape and size, it was agreed that all original stones would be retained. To this end, each of the 25 domes had to be dismantled in order to remove the damaged iron dowels. Such an effort had never been undertaken before anywhere in the world.

Once each stone had been numbered and catalogued, the individual marble blocks were dismantled and reassembled on the floor. The iron dowels were removed and cracks were filled using precisely-fitting stones. It took the stonecutters eight months to successfully repair the first dome using traditional building techniques – thus establishing the methodology for repairing the rest of the mausoleum. This allowed urgently needed repairs to the roof to be taken in hand.

The repairs to the domes were coupled with repairs to the 35cm thick arch stones and the severely damaged diamond-shaped pendentives which support the marble domes. All in all, the repair of the 25 domes has taken almost four years, which amounted to more than 25,000 days of work for the stone craftsmen.