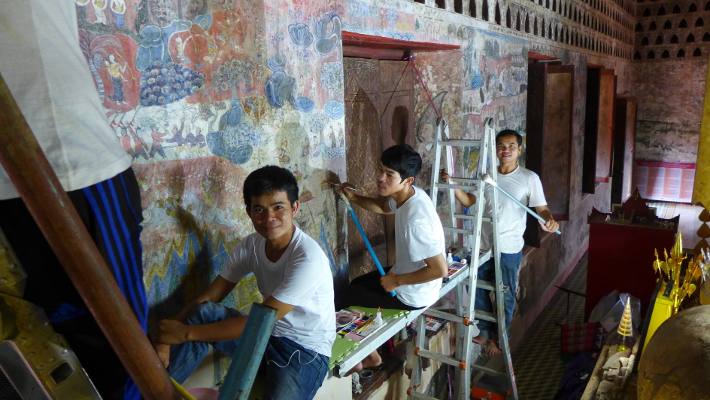 Between 1818 and 1824, King Anouvong had a monastic complex built in Vientiane which has weathered all that history has thrown at it. The oldest construction in the city, it is now a national memorial and museum housing the largest and most significant collection of 15th to 19th-century Buddhist sculpture and what are probably the oldest murals in the Lao People’s Democratic Republic.

Only a few years after the monastic complex was completed, two Siamese invasions left the city of Vientiane almost razed to the ground. Vat Sisaket alone was spared. King Anouvong had attacked Siam in a bid to secure the independence of his kingdom. He and his family were publicly put to death in Bangkok, and the people of Vientiane were deported to Bangkok and neighbouring Siamese regions for forced labour. It was not until the French colonisation of Laos, from 1893 onwards, that the city began to recover. Vat Sisaket, still home to monks while Vientiane had lain deserted around it for nearly 70 years, was restored for the first time in 1896. More restoration work was to follow.

In the sim, the temple and heart of the complex, 400m2 of murals from five different periods can be seen today. They depict adventures from the life of Prince Pookkharabat as told in the Balasankhya Jataka, alongside decorative floral compositions. Created between 1820 and 1960, they are a unique testament to the changing style of Lao Buddhist mural painting. Today, their condition is characterised by earlier structural damage, rising damp and salt deposits in the walls, crumbling plaster, peeling layers of paint and stubborn accumulations of dirt.

There used to be murals in the cloister which surrounds the temple, but they have been almost completely destroyed. Produced in part using unsuitable materials and protected only by a roof, they proved unable to withstand the tropical climate over time.

Work to comprehensively restore the buildings began in 2011. Something urgently needed to be done, but the expertise required for the extremely complicated conservation and restoration of the temple and cloister murals was unavailable in Laos; this prompted Germany’s Federal Foreign Office to release cultural heritage funds for the project. Not only can the murals now be preserved, but Lao artists have an opportunity for further training too. Extensive assessments were carried out and a conservation and restoration plan drawn up in cooperation with the Heritage Department of the Lao Culture Ministry. An international team started putting that plan into practice in 2014. A sample in the cloister shows what the original painted decoration was like. In the temple itself, the many visitors can already marvel at the first results of the mural restoration.