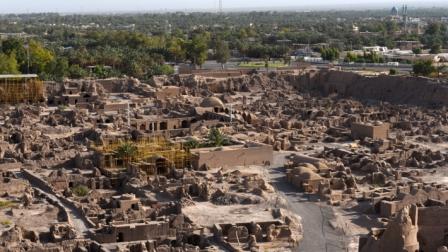 The Bam Citadel in south-eastern Iran is the world’s largest clay-built complex, with a history spanning more than 2500 years. On 26 December 2003 the Citadel was almost completely destroyed by an earthquake. Large parts of one of the central buildings in the Citadel, the Sistani House, which dates back to the late 18th century, also collapsed.

Since 2007 the Cultural Preservation Programme of the Federal Foreign Office has been promoting the project to reconstruct the Sistani House, incorporating the existing ruins to bear witness to its architectural and cultural history, and is thus supporting the efforts of the Iranian Cultural Heritage, Handicrafts and Tourism Organisation (ICHHTO) and UNESCO to preserve and maintain the Citadel.

A team from the TU Dresden submitted proposals for restoring and rebuilding the Sistani House which, as well as reconstructing destroyed sections in keeping with the original, placed an emphasis on preserving key parts of the ruins as a testimony to the past and incorporated preventive measures to minimise earthquake damage. Subsequent restoration and reconstruction projects in the Citadel also included subtle but effective improvements in the clay buildings’ earthquake resistance. In the case of the Sistani House, this was achieved by reinforcement of the clay bricks with date palm fibres, vertical anchoring as well as the use of ring anchors and installation of tension elements into the horizontal joints. Comprehensive theoretical investigations and practical experiments formed the basis for the measures, which drew on the latest scientific findings as well as improved technologies adapted to the task in hand.

The project involves a significant degree of knowledge transfer. As well as the technologies, the methods and planning, ranging from the archaeological rubble clearance, through the drafting and approval stages, up to the working drawings and construction supervision, are to serve as a model for how to proceed in the case of valuable cultural structures.

The project was realised through several annual campaigns in which Germany was responsible for the planning and the technical and technological requirements as well as implementation of the injection grouting and anchoring work. The Iranian Cultural Heritage Organisation then performed the rest of the reconstruction work, guided and supervised by Germany. Completion and full re-use is scheduled for 2015. Over the course of the project a good working relationship with the Iranian Cultural Heritage Organisation ICHHTO has been established and maintained, in which both sides have complemented and supported each other. In the past years the project has therefore also shown Iranians that international cooperation is viable and effective.