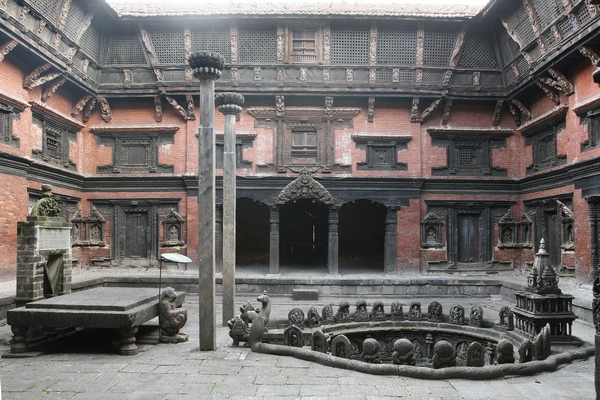 The Kathmandu Valley in Nepal boasts no fewer than seven World Heritage sites. One of them is Patan Royal Palace along with the temples in the palace complex. Following the two earthquakes in April and May 2015, the Federal Foreign Office, which has been committed to the preservation of this cultural heritage site for years, joined with the Gerda Henkel Foundation to launch a joint initiative to rebuild damaged cultural property in Nepal.

Since 2008, the Federal Foreign Office has provided a total of 250,000 euros for the preservation of the palace and the temples in the complex. For example, in various stages, the fountain in the south courtyard, Sundari Chowk, and the Bhandarkal water tank were restored, followed by the building’s south wing and the rear section of Sundari Chowk. When Nepal was hit by a severe earthquake in April 2015, the restored wings of the square courtyard stayed standing, but virtually the whole east wing caved in.

Only the ground-floor arcade remained. But work to rebuild the east wing started quickly, in the autumn of 2015, again with support from the Federal Foreign Office.

Structural elements which were salvaged are being used in the restoration

All the beautifully carved wooden elements rescued from the ruins, as well as the tiles which were recovered, are being used to help rebuild the courtyard’s façade. This is possible thanks to the traditional construction techniques using clay mortar, especially as the masons and carpenters are the descendants of those who created this architecture back in the 17th and 18th centuries.

The upper storey of the main courtyard building has been home to the “Architecture Galleries” museum of architecture since 2013. This is open to the public as part of Patan Museum, which was established in 1997. When work on the east wing is finished, Sundari Chowk will complete the museum in January 2017. The restoration, reconstruction and conversion work gives an immediate insight into a multifaceted palace complex which contributes hugely to the identity of the Kathmandu-Patan metropolis and is thus a symbol of the area’s rich architectural heritage.

Responsibility for implementing the work lies with the Kathmandu Valley Preservation Trust, which has saved and restored numerous buildings in Kathmandu and Patan since 1992. Between 2016 and 2018, with help from the Gerda Henkel Foundation, the Krishna temple will be repaired and the collapsed Hari Shankar temple rebuilt.