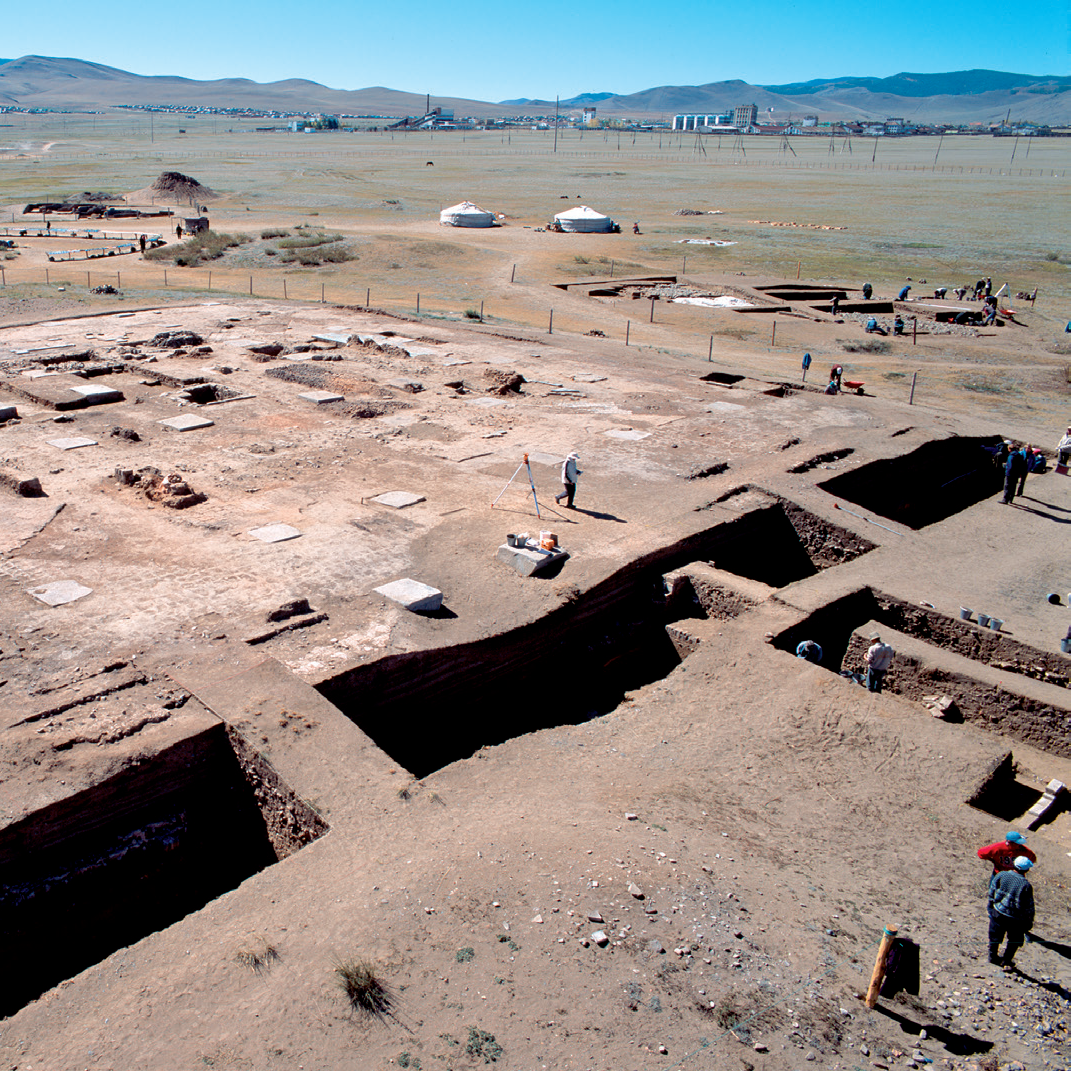 By reconstructing and safeguarding elements of a monumental Buddhist temple dating from the 13th century, research findings can now be presented for the first time on the site of the former Mon- golian capital of Karakorum, where they were discovered.

Karakorum is located around 300 kilometres west of Ulan Bator in the Central Mongolian grass steppe. For a short time during the 13th century, the city was the capital of the Mongol Empire. It served as a hub for the Mongol Empire’s tribes and a cosmopolitan meeting place for people from a very wide range of nations and religions. Mongolians still regard Karakorum as a key site for the country’s history and identity, as well as the nucleus and birthplace of the Mongolian nation.

It is almost impossible for contemporary visitors to the city founded under Genghis Khan to imagine the dramatic history that played out beneath the uneven terrain to the north of the Erdene Zuu monastery, which dates from the Modern era.

Since 2000, German and Mongolian archaeologists have been working together to research the history of the city of Karakorum. In addition to excavations in the city centre, they primarily concentrated on a detailed examination of the Great Hall in south-west Karakorum.

As the extensive excavations revealed, this was a square Buddhist temple whose walls were around 40 metres long. The magnificent hall designed in the Chinese style rose up from a two-metre-high, artificially stacked platform and was supported by 64 wooden columns on plinths in eight rows of eight. A stupa building in the centre and the division of the interior space into coloured flooring segments clearly demonstrate the mandala concept. The lotus thrones with the remains of large Buddhist sculptures lend weight to this interpretation.

Although large parts of the building’s architecture have not survived, the high platform made of artificial layers of earth, on which the temple originally rested, is still recognisable today.

In order to counteract the constant threat of erosion and the prevailing adverse weather conditions in Mongolia, extensive protection measures have been in place since 2013 as part of a conservation project. These include rebuilding the wall that originally surrounded the platform, extensively safeguarding the platform surface, uncovering the remaining plinths, and erecting staircases that give visitors access to the platform.

By protecting and partially reconstructing the monumental temple, episodes from the past which had a significant impact on modern Mongolia can be made accessible to a broad audience for the first time as part of the German-Mongolian research project.