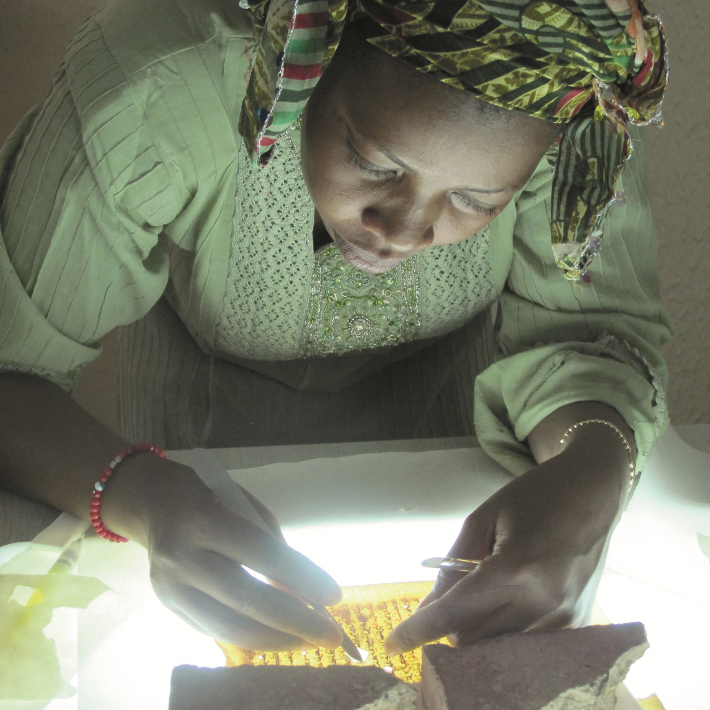 The story was in the news for weeks in late 2012, when radical Islamist rebels in Mali were threatening to destroy all the 12th and 13th-century Islamic writings which had until that point been kept in Timbuktu. Around 285,000 of the manuscripts, which are included in the UNESCO World Cultural Heritage list, were evacuated to Bamako in a secret rescue operation. Now these historical documents need to be preserved and made permanently accessible for research.

This rescue operation was the work of librarian Abdel Kader Haidara from Timbuktu. With many brave helpers, he secretly organised the transport of the manuscripts to Bamako, with financial support from the Federal Foreign Office. In this way several hundred thousand documents from the old Ahmed Baba Institute were saved – unnoticed by the Jihadists, who had in the meantime established their headquarters in the modern library building. In the autumn of 2014, Haidara was presented with the German Africa Award by Foreign Minister Frank-Walter Steinmeier in recognition of these efforts.

Germany’s help in saving the Timbuktu manuscripts is also substantial in financial terms. More than half of the international aid given to SAVAMA-DCI, an NGO which represents the overwhelming majority of the manuscript-owning families of Timbuktu, comes from Germany.

Germany remains the most important bilateral donor in 2015, thanks to the Cultural Preservation Programme of the Federal Foreign Office, the Gerda-Henkel-Foundation and the Jutta-Vogel-Foundation. The “Center for the Study of Manuscript Cultures” of the University of Hamburg coordinates the use of Germany’s contribution under the leadership of Dr. Dmitry Bondarev.

Archiving and digitising the manuscripts

Coordination and collaboration between the partners involved has improved tremendously since the project began. An International Strategy Conference held in the Federal Foreign Office in June 2014 was instrumental in this regard. The Malian Government, civil society, multilateral and bilateral partners, foundations and research institutes have since jointly developed a strategy designed to reconcile the interests of the Malian owners with those of international research. The German Embassy in Bamako coordinates a network to this end and regularly invites all partners to meetings.