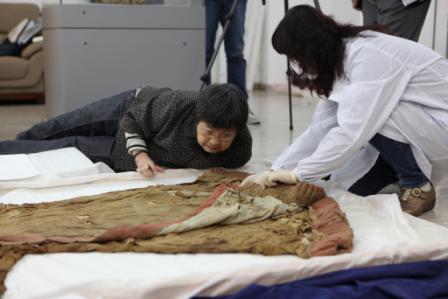 Clothes make the man, but very seldom they can survive the millennia. Due to the extremely dry climate of western China, intact trousers, skirts and caftans as well as boots and leather coats are frequently brought to light during archaeological excavations. With this project, a joint research group of five German project partners in cooperation with the Chinese Academy of Cultural Heritage and the Xinjiang Uygur Autonomous Region Bureau of Cultural Heritage (PR China) aims at reconstructing the knowledge about ancient techniques and body, social structures, availability of resources and trade networks in Eastern Central Asia approximately from 1200 BC to 300 AD. Methods from various disciplines will be utilized to reach this goal, including archaeology, textile- and leather research, dyestuff analysis, ornament studies, cut analysis, paleopathology, vegetation and climate research, cultural anthropology as well as linguistics.

The oldest discoveries of clothing originate from the less well known indigenous people from the Turfan and Hami regions. As to the clothes dating from the 7th to 3rd centuries BC, these might be identified as remnants of local people as well as of immigrated groups of mobile pastoralists. Traces of the nomadic Xiongnu are to be expected among the finds from the 3rd to the 1st century BC. With regard to the most recent finds from the 1st century BC to the 3rd century AD, influences exerted by immigrants and travellers from China, the Greco-Roman Empire, Parthia, Sogdiana, and the Saka city states of the Kushan Empire at the southern edge of the Tarim Basin can be identified.

Material analyses and the documentation of the archaeological finds contribute to the development of sustainable practices for the physical conservation of cultural heritage in Xinjiang and their virtual availability worldwide. The training of Chinese conservators and the production of related teaching material are of especially high value in the project.

The times the different sites of which the study material was selected from were occupied vary in length and can be divided into several phases from the end of the 2nd millennium BC to the early 1st century AD. Textile finds from Xinjiang have been investigated internationally especially in terms of material and manufacturing techniques.

Unprecedented primary data are gained from the investigation of the apparel of individuals, their climatic environment and texts written in local languages both in quality and quantity, and they will add to the history of knowledge in central and eastern Central Asia. Some of the innovations which we uncovered (e.g. the invention of trousers) are of global importance and are up-to-date still today. They emphasize how important it is to analyze archaeological data on a global scale and to make them accessible to scientists for further research and the broader audience.

For our Chinese partners, the practical goal aspired from the research lies in the development of sustainable practices for the physical conservation of cultural heritage in Xinjiang. In cooperation with German specialists, the Chinese Academy of Cultural Heritage organizes the training of conservators in safeguarding the find material from China (compare the project “Conservation and restoration of archaeological leather”).

Leibnitz Institute for Zoo and Wildlife Research in the Forschungsverbund Berlin e.V.

Project promoted by: Federal Ministry of Education and Research (BMBF)