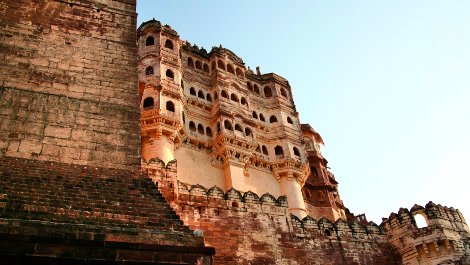 Mehrangarh Fort stands majestically high above the Indian city of Jodhpur. Its scale, the filigree details and its unique situation make the fort a cultural gem on the subcontinent and a valuable heritage for future generations.

The fort was founded by Rao Jodha of the Rathore dynasty in 1459 and in terms of both its dimensions and its construction is an outstanding example of Rajput architecture, which was perfectly oriented to the climatic conditions in this desert region: horizontally and vertically staggered rooms, open and closed areas ensure optimum ventilation of the buildings, made of local red sandstone. The exterior is characterized by filigree sandstone jali screens, which let light and air flood in.

The existing palaces and temples were largely built between the mid-17th and mid-18th centuries, with the Zenana, or Queens’ Palace, forming the heart of the ensemble, both in historical and in spatial terms. Since then the fort, built of red sandstone and set high on a rocky plateau, has been continually extended and altered. Up until about 1890, the fort served as the residence and seat of government of the rulers of Jodhpur-Marwar. Not until the 1940s were parts of it again inhabited; the ladies of the court still resident there finally left the Zenana in the 1960s. Mehrangarh Fort has been a museum since 1974 and has become a prime attraction offering outstanding exhibitions.

The fort’s sandstone facades in particular are at risk from material fatigue owing to the severe climatic conditions. Decades of inadequate maintenance work have led to serious damage to the facades and interiors of the Zenana. The project of preserving the Zenana began in 1997 with initial preparatory measures including an architectural survey, the listing of recommended conservation measures for each room and urgent repairs to make the ceilings and roofs safe. Conservation and restoration work was carried out between 2006 and 2008. All work was carried out by the indogerman team following the principle of minimal intervention but with the goal of preserving the historic structures, materials and surfaces in as authentic a manner as possible in order to retain for future generations the splendour of the fort in its original state.