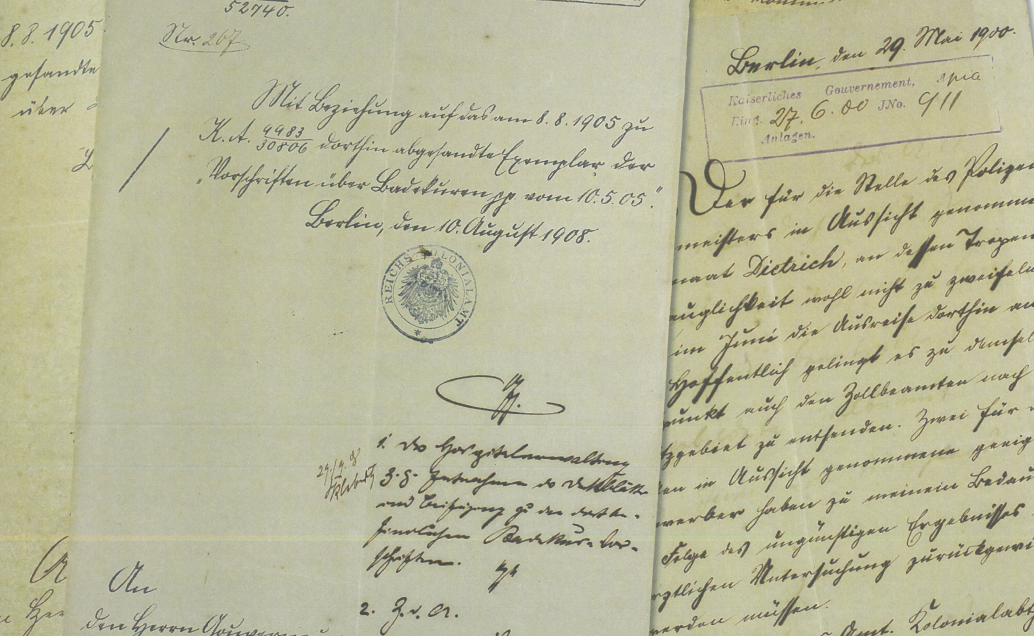 Germans arrived in Samoa in around 1840, when the Hamburg-based Godeffroy company relocated its main Pacific trading base from Valparaiso in Chile to the Samoan capital, Apia. German sailors and merchants settled here, married Samoan women and helped develop the island. A German school, postal agency and consulate were fixtures of everyday life in Apia long before Western Samoa officially became a German colony in 1900.

Samoa was the last colony acquired by the German Reich, and this had a number of very positive effects for the country. Firstly, lessons had been learnt from past mistakes. Above all, however, the Governor, Dr Wilhelm Solf, pursued a cautious, circumspect, paternalistic line in coordination with local advisers. Samoan autonomy in the villages was retained, in some cases even extended. The Samoans were allowed to use the land outside Apia. Samoan, not German, was the first language in schools.

Following the islands’ occupation by New Zealand at the beginning of the First World War, energetic appeals from the Samoan fautua (tribal chief) Tamasese to the New Zealand military administration prevented the planned summary expulsion of Germans. Tamasese succeeded in obtaining permission for German husbands to stay with their Samoan wives, with the result that more than one German-Samoan marriage was concluded at the last minute. Walking through the streets of Apia today, or leafing through the Samoan phone book, one is struck by the many German names: Keil, Kruse, Berking, Retzlaff, Stünzner and many more. None of these Samoan-Germans today speak German, but the word “German” still has a positive ring in Samoan ears. After the Second World War, even though their own country was hardly prosperous, many Samoans with German “relations” sent CARE packages to starving Germans in war-ravaged Europe. Nor was it coincidence that in 1989 Samoa was the first country in the world to issue a special stamp to mark the fall of the Berlin Wall, at the same time recollecting the historical links between the two countries since the 1889 Treaty of Berlin.

In order to underscore Samoa’s good relations with the Federal Republic of Germany and to keep up memories of our shared history, the Federal Foreign Office is funding the digitization of German colonial files in Samoa. The Federal Archives will then secure the archive material so that it can be consulted. The material thus preserved bears witness to personal stories and fates as well as to the political ties between the two countries in the colonial period.