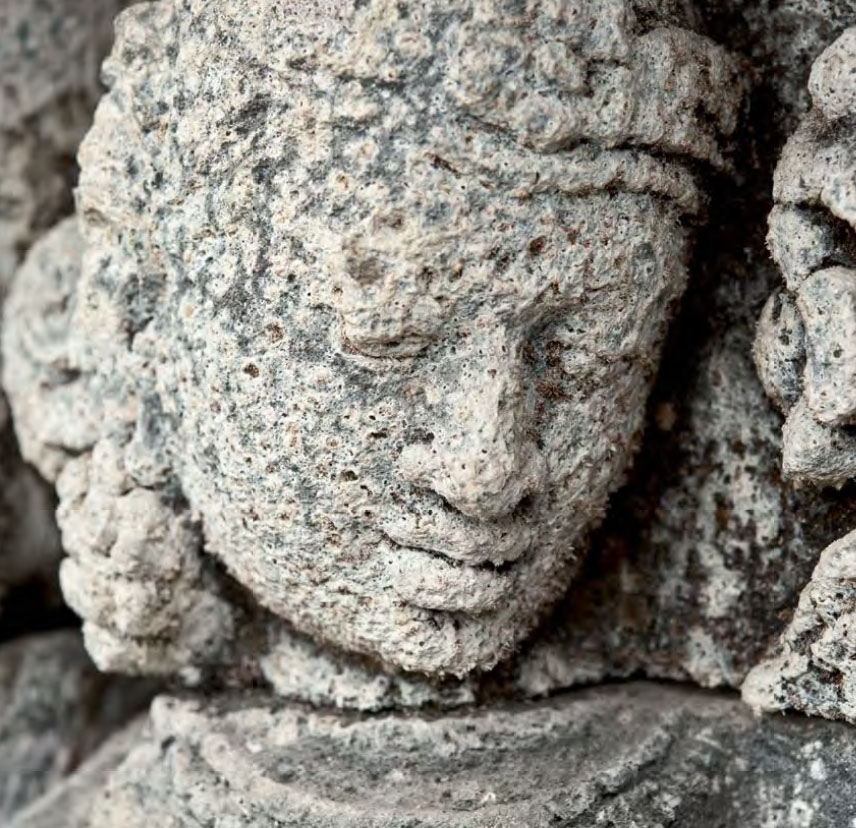 On 26 October 2010, Mount Merapi, one of the most dangerous volcanoes in the world, became active again. It erupted on 5 November, causing extensive damage. Borobudur, which has been a UNESCO World Cultural Heritage site since 1991, was completely covered by a layer of volcanic ash. Cleaning work was undertaken immediately, and also received funding from Germany. However, the question subsequently arose of how harmful the volcanic ash was for the precious reliefs. In order to answer this and other questions, the Cultural Preservation Programme of the Federal Foreign Office has been funding a UNESCO stone conservation research project since 2011, which is being carried out in cooperation with the Borobudur Conservation Office (BCO) and the Indonesian Ministry of Education and Culture.

Borobudur Temple was built under the Sailendra dynasty during the eighth and ninth centuries. Its design and stone reliefs make it one of the most impressive World Heritage sites. Six square terraces with 1460 reliefs depicting scenes from Buddhist mythology, niches with countless sculptures of the seated Buddha, a further 72 statues of the Buddha in bell-shaped stupas on circular terraces, and the main temple at the top of the monument were built in the fertile Kedu Plain, the Garden of Java. The foundation, a natural hill formed by aggradation, already proved to be unstable at the beginning of construction work. The volcanic building stones andesite and basalt were not extracted from quarries, but rather from the rivers.

The first large-scale restoration project was carried out between 1907 and 1911 and coordinated by Theodore van Erp. The walls were at risk of collapsing, and water was shooting out of the relief walls. During the restoration, the walls were stabilised and the drainage system was improved. The next major restoration phase took place between 1973 and 1983. This UNESCO project was run by Caesar Voute from the Netherlands. All of the relief walls and galleries were dismantled and rebuilt (anastylosis), while stabilising concrete platforms and an internal drainage system were integrated into the monument.

The complex internal drainage system created new problems. The magnificent reliefs remain exposed to destructive moisture penetration and frequent leaks. Another threat to the reliefs is posed by ongoing crust formation and flaking on the stones, as well as by salts that damage the structure. The great range of features in the building stones mean that the degree of damage varies among the reliefs.

Apart from providing scientific documentation and analysis of the weathering process, experts are developing a wide range of methods and materials to conserve the reliefs. As part of the cooperation, the BCO’s researchers and restorers are receiving further training in modern analysis and conservation techniques.